Two weddings and a Holiday

By The Origami Boutique
Posted 14th August 2015
In Uncategorized
Two weddings and a Holiday2015-08-142018-01-23https://theorigamiboutique.com/wp-content/uploads/2017/11/origami-logo-retina.jpgThe Origami Boutiquehttps://theorigamiboutique.com/wp-content/uploads/2017/11/origami-logo-retina.jpg200px200px
0
0

I’ve been all year looking forward to August, because not only a good friend was going to get married but actually there was going to be two good friends having their wedding parties a week apart from each other.

Knowing them so well I felt honoured to offer my services, and even more when they said yes! For one I got to work on the wedding invites while the other had her bouquet done. None went for a traditional wedding as you can expect and both gave me immense pleasure to do.

For the invites I knew I wanted something that represented my friend, the bride, as unfortunately due to the distance I haven’t had the chance to meet the groom (now husband) as often as I would like 😉 So I asked her for one of her sketches… she used to spend all our uni classes sketching in between her notes and everyone knew if they saw a page of her notebook who it belonged to. That was the basis for the invites, from there and with the colour scheme she gave me I started working on a model that was going to be compact, show their love and would unfold to present the receiver with all the needed information. While unfolded the invitee would get hints of what the wedding day would be like by knowing where the ceremony and reception were going to be but also with the colours chosen and the handmade nature of the invites.

We then chose a matching square envelope that she sealed with cute stickers with their details on.

After opening the envelope the invite was revealed looking like interlaced hands:

The invite could then be opened to show all the details:

From what I was told everyone commented on them so first wedding success and as expected the couple looked great on the day!!

For the second wedding the bride was even more unconventional. Even before I asked I could bet anything that she wasn’t going to have a traditional bouquet, so I offered to make her an origami bouquet. She jumped on the opportunity and told me what her idea was. She would like it to have a fair amount of bling so instead of just doing the bouquet with some diamanté accents I’ve added some brooches to make it extra special. The colours, red, white and silver were chosen to match her theme and the paper I worked with had a silky finish that made it stand out even more! But judge for yourself:

There weren’t any bridesmaids but the flower girl took a small matching bouquet. As she was only 4 years old I’ve added a few hanging ribbons to give her an extra entertainment and I can tell you I spotted her playing with them more than once so again… second wedding success!!

In between weddings I got the chance to visit the Azores (where the first wedding was) eat the always amazing Portuguese food and then fly to mainland Portugal to visit family and go to the second wedding. It was just under two weeks full of great moments but here’s just a couple of photos… if you have the chance get on a plane and fly to Azores, you won’t regret it I promise!!

This site uses Akismet to reduce spam. Learn how your comment data is processed. 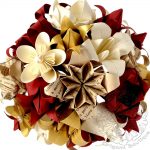 Hello world!Uncategorized
We use cookies to ensure that we give you the best experience on our website. If you continue to use this site we will assume that you are happy with it.Ok